In this anachronistic painting the mirror reflects barmaid’s back in the mirror behind her – which optically is impossible to see in reality in such a frontal position, but also it reflects something else – a man in the right hand corner of the mirror and the hanging legs of an acrobat in the left hand corner. While the arrangement of the painting brought confusion at the time with contemporary critics as being impossible, and optically incorrect, although, in the painting the viewer could be the onlooker (or the artist himself) as man in the right hand corner) or participant of the spectacle (the acrobat performance). Because of its multiple viewpoints and mirrors it could be compared to Velásquez’ Las Meninas or Christ in the House of Martha and Mary. 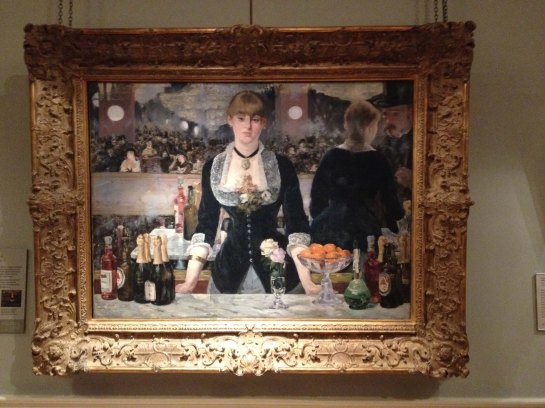 Canadian photographer Jeff Wall extends the theme and idea of the painting further in his Picture for Women photograph by positioning the camera at the centre of the work, so that it captures the act of making the image while at the same time, is looking out at us (http://www.tate.org.uk/whats-on/tate-modern/exhibition/jeff-wall/room-guide/jeff-wall-room-1).