This pilotless aircraft (SD1 Drone) was fitted with cameras to take photographs of the enemy. It was used by British Army for battlefield reconnaissance in the 1960s. It was flown by an operator on the ground using radio control. As it did not have undercarriage for landing it would be brought safely to the ground with the parachute. 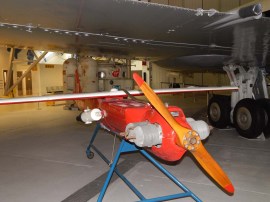